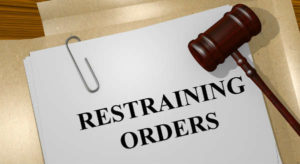 When a relationship goes wrong or is on the verge of going wrong, things can become more negative than you thought possible. The legal system provides tools to help people who have found themselves in an angry or abusive relationship. The legal system cannot prevent every wrong, but it can give you some degree of protection.

A spouse turning physically or emotionally abusive and an acquaintance or stranger inappropriately acting on their infatuation are classic examples of “love” gone bad.

Just as the law has a role in love when people commit to a relationship through marriage, it also has a role when relationships collapse (divorce), become dangerous, or someone attempts to force an unwanted relationship. Enter the restraining order, or as it most commonly is known in North Carolina, the domestic violence protective order (DVPO).

The goal of a restraining order is to protect the applicant from the person it targets. The victim doesn’t need an attorney to seek a protective order, but a lawyer can make the process much easier.

What Is A 50B Protective Order?

Violating a 50B Protective Order

WomensLaw.org details three ways to get help if someone violates a 50B domestic violence protective order:

What Is a 50C Protective Order?

North Carolina’s 50C civil no-contact order is designed to protect the applicant from nonconsensual sexual conduct or stalking by people they are not intimate with or related to, people ranging from co-workers and neighbors to strangers.

For the purposes of a 50C, nonconsensual sexual conduct is “generally any intentional touching, fondling, or sexual act (either directly or through your clothing), for the purpose of sexual gratification or arousal that you did not consent to,” according to WomensLaw.org.

The definition of stalking “is generally when someone repeatedly follows or harasses you with the intent to place you in reasonable fear for your safety or your immediate family’s safety or to cause you emotional distress (harm),” WomensLaw.org explains.

The classic example of a 50C protective order case is a fan obsessed with a celebrity. Celebrities who have had to request other states’ equivalent of North Carolina’s 50C include Gwyneth Paltrow, Selena Gomez, Ryan Gosling, Taylor Swift, Justin Timberlake, Halle Berry, Usher, Lady Gaga, and Miley Cyrus.

However, you don’t have to be a celebrity to have an obsessed fan. If a judge deems a person merits being put under the restrictions of North Carolina’s 50C protective order to shield you from nonconsensual sexual conduct or stalking, there are penalties for violators:

And it doesn’t take a 50C to justify the arrest of someone accused of violating North Carolina laws against threats, harassment, or stalking.

Where Can Victims Turn for Help and Answers?

Restraining orders often spring from cases of domestic violence. In North Carolina, there are a variety of resources available to victims, including:

If you choose to tackle the restraining order process with an attorney at your side, the Raleigh family law firm of Charles R. Ullman & Associates is the place to turn for a certified specialist in family law who knows North Carolina, its courts, and the resources available to people facing these types of issues.