The Complexities of International Marriage 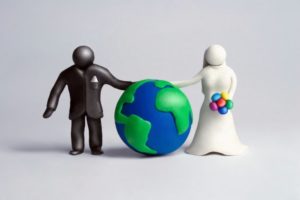 International marriages, where one partner is from a country different than their spouse, are on the increase around the world. In North Carolina, the amount of foreign-born individuals has increased from 1.7% in 1990 to 7.3% in 2011. Statistics show that about half the immigrants that move into an area marry within the local population.

Defining an international marriage is a difficult undertaking. It’s clear enough when a foreign-born individual arrives in another country and marries a resident of said country. It’s also safe to say that when two people of different nationalities marry in a third country that this counts as international marriage. For record-keeping purposes, however, these marriages may not always be included in statistical analysis.

Pulling the Statistics Together

The multiplicity of different situations that result in international marriages means that data for this group is piecemeal which makes it hard to draw statistical conclusions. This means quantifying these marriages for factors such as divorce rates may be inconclusive, although there is some data available for certain discrete groups, such as foreign brides from marriage services.

Keeping Your Spouse in the USA

The challenges for those involved in an international marriage and wishing to reside in the United States are considerable. Verification of the actual marriage isn’t much of an issue. As long as it meets the requirements of the country in which it took place, it is considered valid by the United States Citizenship and Immigration Services (USCIS). Recently, this has been applied to same-sex marriages as well.

The more substantial challenge is passing the interviews which are part of the USCIS procedure for detecting insincere marriages. These are designed to detect marriages in which foreign-born spouses enter into marriage solely to gain a green card. The granting of a green card happens at the two-year mark, at which point the foreign-born spouse is free to leave the marriage and retain U.S. residency.

These interviews are conducted with each partner separately to see how their knowledge compares, and to validate that it resembles what the USCIS considers a “normal” marriage.

Depending on the interviewers’ suspicions, these sessions can create a great deal of trouble for the participants. For instance, do you know the color of your spouse’s toothbrush? Although it seems trite, it is a question used by the USCIS in their interviews.

An international divorce is every bit as complicated, perhaps more so, than an international marriage. When spouses are from different countries, with assets in perhaps still another, the situation can get very complicated very quickly. U.S. states have different approaches regarding how assets will be divided. Some states require full disclosure of assets, while others do not. Pre-nuptial agreements are more likely to be enforced in some states than others, while some states exclude inherited property from divorce proceedings altogether.

Assets in other countries may be subject to their laws if there is disagreement between the parties. These laws may be quite different from any U.S. jurisdiction. The same might apply to child custody laws in other countries as well. This means that before even beginning the divorce process, those wishing to do so may need the advice of a lawyer to before they can even decide where to file.

With this in mind, it is strongly advised to contact a qualified family law attorney knowledgeable about the international marriage and divorce laws of your state and home country.