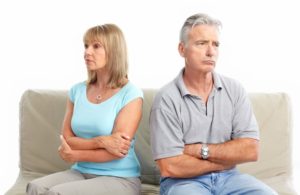 Divorce is difficult regardless of your age. But dissolving a marriage as an older adult who is retired or approaching retirement presents particular challenges for the divorcing spouses and required trusted legal guidance.

A later-in-life divorce can reduce the amount of income available in retirement or alter your timetable for retiring and require you to work longer than planned. Determining the value of the marital property that you and your spouse have accumulated together can be complicated and contentious. Dividing retirement accounts can incur tax penalties if not handled properly.

If you find yourself facing divorce after 50 or divorce after 60, you will need to work with a Raleigh elder divorce attorney who has experience dealing with the issues that arise in elder divorces. Raleigh Attorney Charles R. Ullman focuses his legal practice on family law matters including gray divorces and offers compassionate legal guidance. Charles Ullman is certified by the North Carolina State Board as a Specialist in Family Law and has more than 20 years of experience guiding clients through the process of separation and divorce. If you are getting a divorce in your 50s or leaving a marriage after 30 years or longer, turn to Charles R. Ullman & Associates for trusted counsel about the issues and considerations involved in divorce after 50 in North Carolina.

What is Gray Divorce?

The demographic trend of older adults getting divorced more frequently has been pronounced in recent decades. While overall divorce rates have declined, the rate of divorce among people in their 50s and older has doubled since 1990, according to the Pew Research Center. Among people age 65 and older, the rate of divorce has tripled since 1990. The trend among aging baby boomers has been described as the “gray divorce revolution.”

Among the factors frequently cited as contributing to divorces among older adults is an increase in life expectancy, the growth of economic independence of women and the values of the baby boomer generation.

Many gray divorcees are dissatisfied with their marriages and seek divorce to gain independence and pursue their own interests for the remaining years of their lives. Sometimes, a gray divorce is caused by loss of a job, empty nest syndrome and the departure of the last child from the family house, health issues or spouses’ different spending habits.

Regardless of the situation, leaving a marriage after 30 years or getting a divorce after 60 years old is never an easy decision.

Couples who are older and have been married for many years are more likely to have accumulated considerable assets during their lives together. A primary residence acquired during the marriage is often a sizable asset, if the couple has lived there a long time and built up substantial equity in the house. Because a house cannot be divided like a bank account, one spouse may have to buy out the other spouse’s equity or the house may have to be sold.

The couple will have to negotiate the ownership of the family home or ask the court to resolve the issue if the couple can’t agree on terms. The division of marital assets may require selling the family home to split the proceeds. A skilled divorce attorney can negotiate the issues involving the ownership of a family residence as part of a separation agreement and help you avoid a contested court proceeding.

Other assets that may be subject to equitable distribution under North Carolina law include the saving accounts, shares of stock, retirement accounts, vested pension benefits, Social Security benefits, gifts from one spouse to the other during the marriage, second homes and other real estate.

These assets are considered marital property if acquired during the marriage. Marital property is divided as part of an equitable distribution process during a divorce, and each spouse is entitled to a share. It is critical to understand all the assets that may be claimed as marital property. The distribution of marital assets may involve dividing large investments, which can be contentious and have tax implications.

Property acquired by either spouse before a marriage or acquired by one spouse such as an inheritance is generally not considered marital property.

The identification, valuation and distribution of marital party is a complicated process. When ending a marriage, you should seek the guidance of an experienced Raleigh gray divorce attorney at Charles Ullman & Associates to protect your separate assets and to be sure that you receive all the marital property to which you are entitled. Charles Ullman has the knowledge of North Carolina divorce law and experience dealing with older adults to offer proven legal counsel to help you resolve issues involved in divorce after 30 or 40 years of marriage.

How Can a Gray Divorce Affect My Retirement?

You and your spouse may have planned for retirement based on your joint income through retirement investments, pensions, Social Security and other sources of income. But a divorce can leave you with a smaller nest egg and less income and have serious consequences on financial security in retirement. It can leave you needing to purchase your own health insurance if you were on a spouse’s plan. Because of the serious impact divorce can have on older adults, retirees and people approaching retirement age, you need to seek trusted legal guidance from an elder divorce attorney.

Retirement accounts such as IRAs, 401(k)s, 403(b)s, and Roth IRAs often represent a couple’s largest assets and can be a source of dispute in a divorce. North Carolina considers retirement accounts acquired during a marriage as marital property and subject to equitable distribution during the divorce process. Pensions accumulated during a marriage also are treated as marital property and divided.

However, separate property acquired before marriage is not typically subject to equitable distribution. The court may weigh numerous factors such as the income of both spouses, the length of the marriage, how much each spouse worked to acquire the property and who will reside in the family home to determine the proper division of retirement accounts.

A court order known as a qualified domestic relations order (QDRO) is used for the proper division of a couple’s retirement assets in a manner that does not trigger penalties. Certain types of pensions such as state and local government pensions are not covered by QDRO and have their own rules.

After a divorce, you will need to review and update beneficiaries on your retirement accounts, insurance policies and investment accounts. An individual can claim benefits based on an ex-spouse’s work history if they were married 10 years and the spouse is 62 or older and eligible to collect benefits.

Our compassionate attorneys at Charles Ullman & Associates understand that separation and divorce among older adults and seniors involve complicated issues specific to this phase of life. If you reside in Raleigh, Cary or elsewhere in Wake County and are facing the end of a marriage after 30 years or 40 years, we can help you consider the consequences of a later-in-life divorce on your financial security, your retirement and your future.

Newly divorced older adults can be financially vulnerable. We offer knowledgeable counsel on elderly divorce issues to help you make informed decisions and avoid unpleasant surprises such as unforeseen tax consequences triggered by improperly dividing retirement accounts. Charles Ullman & Associates is a small law firm in Raleigh that focuses only on family law issues. Our elder divorce attorneys are here to assist.

For more information or to schedule a consultation with a Raleigh gray divorce lawyer, contact us by calling our toll-free number or using our online contact form.