What Is Date Rape? 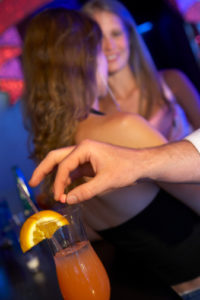 “Date rape”, also referred to as “acquaintance rape” or “drug-facilitated sexual assault” (DFSA), is a sexual act committed against your will by someone you know. The rapist could be someone you go out with or even your girlfriend, boyfriend or partner. It could also be anyone else you know such as a classmate, co-worker, boss, ex-partner, family member or neighbor. Both women and men can be victims.

The effects of date rape are often severe for the survivor. In addition to feeling violated, date rape survivors may experience:

While all these feelings are real, date rape survivors must keep in mind that they are not at fault. They are victims – and survivors – of a crime.

Date rape drugs, also referred to as “predator” drugs, can have a sedative, hypnotic, dissociative and/or amnesiac effect which makes it more difficult for victims to remain in control of their situation. Sexual predators use date rape drugs in nearly any situation such as at parties, at clubs, at restaurants and in many other social settings.

Campus parties – often crowded, loud and full of alcohol – can give predators the means to use date rape drugs without a victim’s awareness or ability to identify the initial predator. In addition to alcohol, commonly used date rape drugs include GHB, benzodiazepines and flunitrazepam and ketamine. These drugs also are often referred to as “club drugs” because they tend to be used at dance clubs, concerts and raves.

GHB (gamma-hydroxybutyric acid) is commonly used as a date rape drug. While the most common form is a clear liquid, it can also be a white powder – which (except for a slightly salty taste) can easily be mixed into an alcoholic beverage without the victim’s knowledge. The effects of GHB begin about 15 minutes after taking the drug and generally last for three to four hours. Common GHB side effects include:

GHB is also known as:

Benzodiazepines are tranquilizers such as Valium, Librium and Ativan, which are commonly prescribed to treat anxiety, panic attacks and insomnia. However, they are frequently used recreationally and can result in sedative, hypnotic (sleep-inducing), anxiolytic (anti-anxiety), anticonvulsant and muscle relaxant properties.

Flunitrazepam (known under the brand name Rohypnol) is a type of benzodiazepine most commonly referred to as “roofies.” Rohypnol effects can be felt within 30 minutes and can last for up to 12 hours. It is sold in tablet form and has no taste or smell – which makes it easy to quickly dissolve into someone’s drink without their knowledge. Roofies and alcohol taken together amplify the effects of both.Common Flunitrazepam side effects include:

Flunitrazepam is also known as:

Ketamine is a drug often used in veterinary clinics and hospitals as a sedative and is a close relative of PCP (phencyclidine) or angel dust. It is a very fast-acting drug which comes in a liquid or white powder form and generally takes effect after only 10 to 20 minutes after ingesting. It is odorless, colorless and tasteless – also making it easy to slip into someone’s drink without their knowledge. In addition, Ketamine is not detectable by blood or toxicology screens after approximately 72 hours.Common Ketamine side effects include:

Ketamine is also known as:

How to Avoid Date Rape

Take the following steps to avoid date rape or situations which could lead to date rape:

If you feel drunk, but haven’t consumed any alcohol – or if have been drinking, but feel more drunk than you think you should – get help immediately as it could be a sign that you’ve been given a date rape drug.

What to Do If You’ve Been Date Raped

If you’ve been date raped, it’s important to first get to a safe place and then to get help, medical attention and counseling.

A Sexual Assault Nurse Examiner (SANE) – a qualified forensic nurse with special training to conduct sexual assault evidentiary exams for rape victims – is generally on call 24-hours a day and will arrive at the hospital emergency room within an hour of the rape victim’s arrival.

In addition to the collection of forensic evidence (rape kit test and collection of clothing), they also provide crisis intervention counseling, STI (sexually transmitted infection) testing, drug testing if drug-facilitated rape is suspected and emergency contraception. The cost of the exam is generally covered by state funds pursuant to the Violence Against Women Act.

Note: Do not shower, wash, douche, brush your hair or change your clothes as you need to preserve physical evidence of the sexual assault. If you suspect that you may have been given a “date rape” drug, ask the medical provider to take a urine sample as drugs are more likely to be detected in urine than in blood.