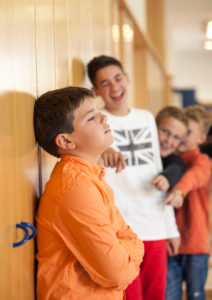 Instead of enjoying childhood, millions of school children today are spiraling into despair due to bullying. For some, like 11-year-old Michael Morones of North Carolina, the pain becomes too much to bear – and suicide seems like the only option.

In January, Michael attempted suicide after peers bullied him for liking the television show “My Little Pony.” Even though the show has gained a huge male audience – called Bronies – and has even inspired a film documentary about the phenomenon, Michael was tormented for being a fan. Although he survived the suicide attempt, Michael suffered severe brain damage and remains hospitalized. If he lives, his family will face ongoing medical expenses and unimaginable sorrow. Please join Charles R. Ullman & Associates and consider donating to a fund dedicated to Michael’s recovery.

Unfortunately, parents aren’t always aware that their children are being targeted by bullies. Experts say kids often hide the fact that they are being bullied because they feel helpless and may want to handle the situation on their own to regain their sense of control. Others don’t tell because they fear retaliation or rejection from their peers, or are simply humiliated and don’t want anyone else to know. Like other victims of abuse, bullied children also may not feel that anyone will understand their circumstances, or even care.

According to the 2008-2009 School Crime Supplement, adults were notified in only one-third of bullying cases that occurred on school property or in school-related activities.

Because children can be so good at masking their anguish, it’s important to look for red flags that may indicate bullying, such as:

Some Kids Are More Likely to Be Targets

Unfortunately, certain types of children are more prone to being bullied than others. The U.S. Department of Health and Human Services has determined that a key component in evaluating whether a situation can be deemed bullying is that there is an imbalance of power in the relationship between the bully and the child who is being bullied.

That imbalance of power often occurs among children who are:

What You Can Do to Stop Bullying

You can’t always be around to protect your children from bullies. But you can equip them with tools they can use to try to navigate the problem. In some cases, it is worthwhile to allow children the chance to work through a situation on their own.

For example, you could:

Because your children may not volunteer that they are being bullied, you also can have short, periodic “check-in” sessions with them to give them a chance to tell you what’s going on. Don’t make it a formal inquisition or put them on the spot. Instead, ask general questions about whether they see bullying at their school, what types of kids get bullied and if they have ever known anyone who has been bullied.  If your gut tells you that they are holding something back, then you can gently prod them to tell you about their experiences. If they get agitated, back off. But keep your eye closely on the situation, especially if you see warning signs pop up.

Enough is enough. It’s time to help kids learn to love who they see in the mirror.