Recognizing Signs that Your Child is Having Trouble Coping with Divorce 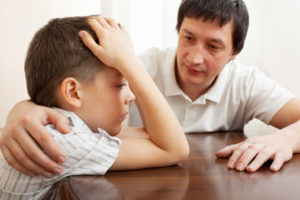 There’s no getting around the truth – divorce hurts. Even the most stable and emotionally secure people can experience significant emotional turmoil after a split. But the problem becomes even more complex when children are involved.

Parents love their children. We frequently hear parents say that protecting their kids is paramount during divorce proceedings. Unfortunately, the best intentions are sometimes not realized, simply because parents who are divorcing have a lot on their minds. Setting aside the emotional pain they are experiencing, there are many practical concerns demanding attention — finding a place to live, making child custody arrangements and settling finances, to name a few. It’s not surprising that they might miss the signs that their kids are struggling with the divorce as much as they are.

The good news is that studies have shown that the majority of children of divorce grow up to be well-adjusted adults, according to child psychologist Daniel Pickar. But he cautions that children of all ages, even babies, can develop emotional problems stemming from a divorce, starting from the initial stages of separation and persisting even years after the divorce is finalized.

It’s natural to expect some anxiety and depression in your kids during a divorce. Pickar outlines some red flags that may indicate a more serious problem:

If you believe your children are experiencing any of these problems, it is important to talk about them with your ex-spouse and to address the issues as quickly as possible. Early intervention will hopefully help you and your child develop a structured and supportive lifestyle, no matter which household they are calling home.