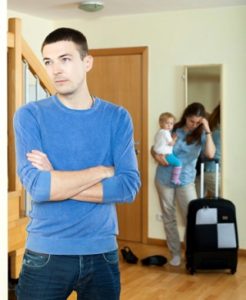 Parental alienation syndrome is the result of the failure of a residential parent to properly exercise his or her parental responsibility. It is a psychological disorder that arises when one parent, consciously or unconsciously, engages in conduct that serves to alienate the child from the other parent. Through the persistent teachings of the parent, or brainwashing, the child is “taught” to hate or disrespect the other parent.

Custody disputes can fuel parental alienation. Inevitably, children receive subtly transmitted messages that both parents have serious criticisms of each other.

Parental alienation syndrome, however, is much more serious. It involves the systematic vilification by one parent of the other parent and brainwashing of the child, with the intent of alienating the child from the other parent.

How Do You Know If It’s Parental Alienation?

Common examples of parental alienation are found where the “loved” parent constantly complains about the lack of financial support from the “hated” parent, thus placing the child in actual fear of going without food, clothing or shelter. Harsh criticisms of the “hated parent,” or statements that he or she does not love the child or has abandoned the child, are also damaging.

When a child is exposed to such conduct over a long period of time, the child’s hatred or distrust can become obsessive, often resulting in panic or fear when the child is with the “hated” parent. Residential parents often use such behavior to justify their refusal to allow contact with the other parent. Many times, the nonresidential parent feels that he or she has little choice but to accede to this manipulation of the alienated child.

Many judges now recognize the syndrome and have begun to impose orders designed to reduce the risk of parental alienation.

Douglas Darnell, a licensed psychologist and author of Divorce Casualties: Protecting Your Children from Parental Alienation, says that the syndrome was first recognized among mental health professionals in the mid – 1980s. How can you tell if your ex is attempting to alienate your child?

Here is a list of warning symptoms and examples of parental alienation, provided by Dr. Darnell:

Family law attorney Charles Ullman used Dr. Darnell in a custody case as an expert and found him to be a very valuable asset.

Concerned parents should consult with a knowledgeable attorney.

Tips on How to Talk to Your Child During a Divorce

Here are some other tips which may be helpful for you, depending on your case: