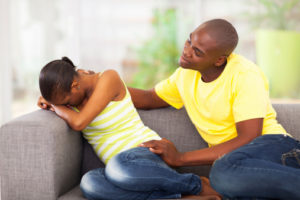 Whether you and your partner are legally married, separated, divorced or cohabitating, sexual intercourse with another person by force and against their will is against the law in North Carolina. In our state, “marital rape” actually carries severe criminal penalties. If you are a victim of marital rape, there are those among us who want to help you and who can help you.

After the Crime of Marital Rape

If you have been raped by your spouse and you are not safe at home, you should seek the assistance of a local domestic violence shelter and be prepared to go to it. If you are in immediate danger, dial 911. Once you are safe, you should call the police if you have not already. You might also contact a trusted friend or family member and/or a local rape crisis center for assistance – just so you are not alone at this trying time.

Next, seek medical attention. This is important for your well-being and for the collection of evidence against your attacker. Investigators may be able to take evidence from your clothing and body to prove the crime. Also, a nurse examiner may look for injuries related to the assault, proof that sexual activity occurred and DNA from the offender on your clothing and/or body.

Be sure that you don’t eat, urinate, shower, bathe, douche, brush your hair or change your clothes after you have been attacked so that you will preserve physical evidence of the sexual assault. (Bring a change of clothes with you.)

It may be a hard decision to have your spouse arrested and to collect evidence that may be used to incarcerate him, but remember: You have been assaulted. You need to protect yourself against further abuse.

North Carolina changed its laws in 1993 to allow prosecution in marital rape. A person who rapes their spouse in North Carolina is subject to the same laws and penalties a stranger would be.

In addition to rape, North Carolina law defines “sexual offense” as engaging in a “sexual act” with a person against their will. First-degree and second-degree sexual offenses and their penalties are the same as for rape.

For the Marital Rape Survivor

Survivors of marital rape in North Carolina do not have to report the crime. But you should know that physicians and hospitals must report certain kinds of wounds, injuries or illnesses to law enforcement officials.

Regardless of whether you report a marital rape to law enforcement – which we strongly urge you to do – you should seek assistance from community resources for abuse victims, which include: