How to Prove You Are Separated in North Carolina 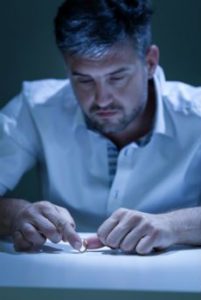 When a married couple decides to file for divorce in North Carolina, they must first be able to prove they have lived separate and apart from one another for at least one continuous year and that at least one party intended that the separation be permanent. This means you will have to provide evidence showing the two of you reside in separate homes (not simply in separate bedrooms in the same house), pay separate bills, have separate accounts and are no longer physically together. Typically, the intent to remain separate is proven by the facts surrounding the separation and that you did not resume living together during the year of separation.

What the Law Says

For either marital party to apply for divorce, North Carolina law says they both must have lived separate and on their own for one year, and either one or both must have been residing within the state for a period of at least six months. According to N.C. General Statutes § 50-6:

“Marriages may be dissolved and the parties thereto divorced from the bonds of matrimony on the application of either party, if and when the husband and wife have lived separate and apart for one year, and the plaintiff or defendant in the suit for divorce has resided in the State for a period of six months.”

If the couple resumes marital relations at any point during their one-year period of separation, the statutory requirements to file for divorce based on separation will not have been met. Should the couple choose to engage in sexual intercourse every now and then, that action may not be considered a resumption of marital relations per N.C. General Statutes, § 52-10.2:

“Resumption of marital relations’ shall be defined as voluntary renewal of the husband and wife relationship, as shown by the totality of the circumstances. Isolated incidents of sexual

intercourse between the parties shall not constitute resumption of marital relations.”

What the Law Means

These statutes mean that court documents do not need to be filed, nor does a separation agreement need to be drawn up, before what most people commonly call a legal separation can occur for a married couple. A married couple is considered to be separated in the eyes of the law from the moment one or both spouses move into a different house or residence with the intention of permanently living apart and ultimately getting divorced. A married couple cannot live in the same house if they want to be legally separated. North Carolina law refers to separation, but not to legal separation. When a person says that they want a legal separation, it is important to determine what the goal or need is, if any, beyond merely separating physically.

As soon as a married couple reconciles their differences and either moves back in together or makes the decision to no longer live separately apart, the clock stops on the one-year period. A lot more must take place for a separated couple who engages in isolated sexual acts to be considered to have reconciled their marital relations.

How to Prove You Are Separated in North Carolina

When filing for divorce, following a period of physical separation, divorcing couples may be able to use a variety of appropriately dated documents to prove they have lived separate and apart for the past year. The attorneys at Charles R. Ullman & Associates recommend using the following documents to prove you are separated:

If you have further questions or need assistance with proving you and your spouse are separated in North Carolina, an attorney from our firm would be happy to discuss your case and advise you on how to proceed.