Student Loan Debt and Divorce, What You Need to Know 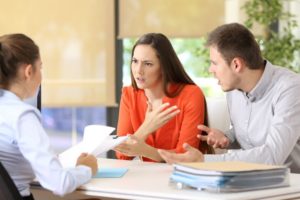 If you are facing divorce in North Carolina, you may have questions about who will be liable for any outstanding student loan debts. You may wonder if you will you be responsible for helping pay your former spouse’s student loans after you are divorced? It is a contentious topic among divorcing couples and a question we often hear from clients. The short answer is it depends on the details of when the student loan debt was incurred and whether the loan benefited the marriage. Analyzing those factors, the court will determine whether the loan debt is marital property or separate property.

Attorney Charles R. Ullman concentrates his legal practice exclusively on family law matters including equitable distribution of assets and debts. He is certified by the North Carolina State Board as a Specialist in Family Law. He can discuss with you whether the family law courts are likely to determine that the student loan debt in your case is marital property. Charles R. Ullman & Associates has more than 20 years of experience representing family law clients in Wake County. Charles Ullman will take the time to understand your circumstances and seek workable solutions to conflicts including the distribution of debt as part of a divorce.

Who Pays Student Loans in Divorce?

In North Carolina, the process of dividing the property of married couples who are getting divorced is known as equitable distribution. North Carolina law assumes that a 50-50 division of marital property is reasonable and fair. In certain circumstances, however, a strong case can be made for why the property including the debts should be divided unequally. Marital property includes both assets such as bank accounts and vehicles and debts such as credit card bills, mortgages and student loans.

During a divorce proceeding, student loan debt may be categorized as either marital property or separate property. Courts make a determination on a case-by-case basis about how student loan debt should be classified.

When couples file for divorce, judges handling a divorce case look at a range of factors including how the student loans were used to determine whether the debt is marital debt or separate debt. If the loans were used to pay a couple’s living expenses while one person attended college or obtained an advanced degree, all or a portion of the student loan debt may be considered to be marital debt.

Depending on the specific facts, the family law attorneys at Charles Ullman & Associates have successfully argued that student loan debt was shared marital debt and in other cases that student loans benefited only one party and therefore the court should not classify the debt as a marital property.

Any debt that a person incurs before getting married and brings into the marriage is generally considered to be separate property. If you borrowed money to attend school before you got married, then the court is more likely to classify that loan debt as separate property.

That means you may be solely responsible for repaying your student loans after a divorce.

The fact that the student loans are in the name of one member of a household is not decisive in determining who is liable for the student debt after a divorce. Courts have a lot of leeway in deciding how to assign student loan debt.

If a debt is marital property, that makes both husband and wife responsible for paying the debt. But it doesn’t mean the judge will divide the marital debt evenly between divorcing spouses. A person who obtained a marketable degree may have a much higher income than his or her spouse and be in a better position financially to shoulder more of the financial burden of the student loan debt.

If a family law judge determines that some portion of the student loan debt is marital property, the court may then consider other factors in deciding how to apportion the debt:

The longer a marriage lasted after a degree was obtained, theoretically, the more the couple would both enjoy the benefits of a degree obtained by incurring student loan debt.

For example, Bill and Brenda got married, and then Bill went to graduate school in computer science. Brenda worked while Bill attended school. Bill took out $80,000 in student loans as well. After earning a graduate degree in computer science, Bill obtained a good paying job with a tech company in North Carolina paying $120,000 a year. If the couple separated immediately after Bill graduated, the student loan debt may be considered separate debt. On the other hand, if they remained married 12 years after he graduated, and the marriage received the benefit of his income for a dozen years, any remaining amount of Bill’s student loan debt may be considered as marital debt. The smaller the benefit that Brenda received from Bill’s degree, the more likely the court is to treat Bill’s student loan debt as his responsibility.

The family law attorneys at Charles R. Ullman & Associates can help you gather the appropriate financial records such as tuition payments, loan statements, income tax returns and proof of graduation to help the court determine how much of your student loan debt should be categorized as marital property for purposes of distribution of debt.

What Are the Tax Implications of Holding the Student Loan Debt?

There may be some tax benefits associated with student loan debt that should be considered.

After a divorce, if you and your former spouse are both making payments on a student loan debt, both you and your ex may claim an interest deduction of up to $2,500 if you file separate tax returns.

It is good when possible to resolve issues involving equitable distribution of debts and responsibility for student loan debt in a separation agreement. Separation agreements are not appropriate in every case, but they are an efficient and private way to deal with issues of debt, if the two sides can come to mutually agreeable terms. The terms of the agreement are negotiated by you and your spouse with the help of your attorneys. You should seek help from a qualified lawyer to draw up a separation agreement.

If either you or your spouse has a significant amount of student loan debt and you have questions about how that debt would be classified if you separate and divorce, speak with a knowledgeable Raleigh divorce attorney who has many years of experience handling issues involving equitable distribution of assets and debts.

The legal team at Charles R. Ullman & Associates is prepared to help resolve potentially contentious issues involving marital property and debt. Our family law attorneys have a thorough knowledge of North Carolina law concerning equitable distribution. We will apply that to help you develop a plan to resolve issues involving student loan debt and other types of debt.