How to Report a Rape that Happens on Campus 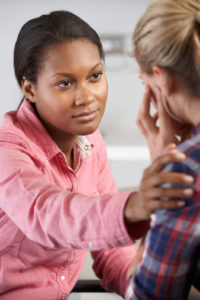 Reporting a rape can be difficult for survivors. Feelings of shock, fear, depression, anger and shame often make confronting what happened all over again with police, doctors and counselors seem like an overwhelming task. Rape survivors must understand that what happened to them is not their fault. They are victims of a violent crime.

If you’ve been raped on a campus or university, the first thing you should do is go somewhere you feel safe such as a friend’s dorm room or house, a public place, the campus police station, etc. It’s important not to isolate yourself or ignore the crime that has been committed against you.

Once You Feel Safe, Report the Rape by:

A Sexual Assault Nurse Examiner (SANE) – a qualified forensic nurse with special training to conduct sexual assault evidentiary exams for rape victims – is generally on call 24-hours a day and will arrive at the hospital emergency room within an hour of the rape victim’s arrival.

In addition to the collection of forensic evidence (rape kit test and collection of clothing), they also provide crisis intervention counseling, STI testing, drug testing if drug-facilitated rape is suspected and emergency contraception. The cost of the exam is generally covered by state funds pursuant to the Violence Against Women Act.

Note: Do not shower, wash, douche, brush your hair or change your clothes as you need to preserve physical evidence of the sexual assault. If you suspect that you may have been given a “date rape” drug, ask the medical provider to take a urine sample as drugs are more likely to be detected in urine than in blood.

North Carolina law does not require rape survivors to report the crime except in the following circumstances:

Those reports, either written or oral, should be made to the Director of the County Department of Social Services in the county in which the child or disabled adult resides or is found.