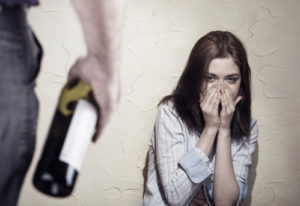 Not surprisingly, alcohol and domestic violence often go hand in hand. The U.S. Department of Health & Human Services (DHHS) reports that violent men are more likely to abuse alcohol than nonviolent men. In fact, approximately 75% of all spousal domestic violence victims – and 66 % of those involved in non-marital relationships – reported that an offender’s behavior involved alcohol abuse.

Other reported statistics show that alcohol and drug abuse only exacerbated domestic violence incidents. According to the DHHS:

While everyone has different tolerance levels and behavioral traits when it comes to alcohol and drug use, it’s important to recognize the potential for escalation of domestic violence when alcohol and/or drugs are involved.

For example, does your partner behave differently when drinking or using drugs? Are they more argumentative, withdrawn or likely to “lash out” at you for no particular reason? Noticing changes in your partner’s behavior that make you uncomfortable or lead you to believe that violent behavior is possible (not necessarily imminent) is the first step in combating the issue and allowing you to decide what’s best for you as an individual.